Two years ago, Smart Parenting magazine asked me to write about my most memorable summer with my kid. And since he was only two, I only had two summers to choose from, and both of them were intensely personal: one was about the time I got my heart broken, and the other was about the time I started to heal. I was hesitant to open up because I didn't ever talk or write about these things in public. But that's the magic of a deadline. Lol.

In honor of Boracay Open, which I'm missing this year, I'm republishing the piece I wrote.

Almost every year, I go to Boracay for the annual Boracay Open, an ultimate Frisbee tournament which attracts teams from all over the world. Last year, I decided to take my then-15-month-old son along. It was his first plane ride, his first trip outside of Luzon, and our first family vacation. 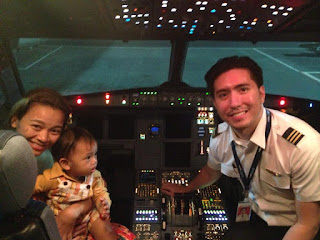 Though his face doesn't show it, A appreciated that the pilot let us into the cockpit.


While I struggled with a fussier-than-normal toddler at the airport, the rest of the trip was much more enjoyable. It was fascinating seeing my son pick up handfuls of fine white sand, letting it run between his tiny fingers. I marveled at how someone who loved swimming pools and bath time so much could sprint away in alarm as small waves washed up against the shore. It melted my heart when, in the middle of playing, he would run up to me and throw his arms around my legs, a look of pure joy on his face. And it was a treat seeing him charm my friends with his bag of tricks: "pogi eyes" (his version of beautiful eyes), "tiyanak" (when he would growl like a little monster), and all his other funny little antics. 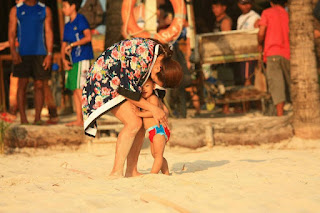 
But the trip was bittersweet. Less than a year before, my son's father and I had parted ways, and I was still getting used to the dynamics of our family. My ex would come to visit regularly, but I realized that this was what a "family vacation" would be from that point on: me, my son, and maybe his yaya. I still hadn't fully recovered from the separation, and I still had so many apprehensions about raising a kid on my own, but there was nothing for me to do but soldier on.


On our last morning on the island, my son and I spent some time on the beach. There weren't a lot of people around, and yaya stayed some distance away, letting my son and me enjoy some quality time together. I watched as my kid, entranced, repeatedly dipped his little bucket into the water and let its contents fall back and merge with the sea. He would call out "Mommy!" just to make sure I was right there. In that quiet, fleeting moment, I felt at peace. 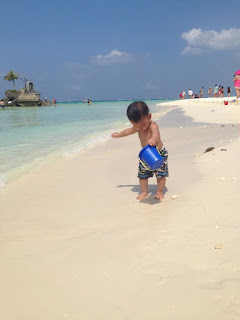 There's a quote that goes, "The cure for anything is salt water—sweat, tears, or the sea." I had spent the previous months running when I needed to clear my head. I cried for weeks, mourning the end of a 13-year relationship. And now the sea was doing its work. I had my son by my side, and we had the whole world in front of us; he and I were going to be OK. 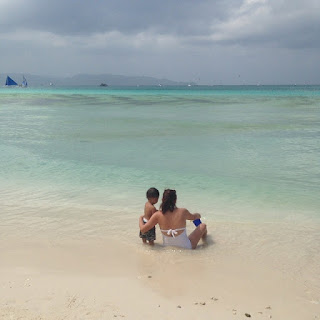