We had to move date night to Friday, which worked out well, since Hamil was able to score courtside seats to the PBA (Philippine Basketball Association) semi-finals! 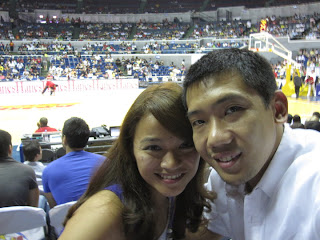 We were thisclose to the court! My barely visible outfit: purple tunic (used as a top) from Topshop, white racerback top from tiangge, necklace from Bangkok.
My husband and I are both big basketball fans. Other girlfriends/wives complain that they have to watch their significant others play, but I love watching Hamil on the court (he's pretty good at it). When I was a kid, I used to watch live games with my family (brothers and cousins)--some of us would root for Ginebra, while others were die-hard San Miguel fans. I lost interest for a few years, and became a fanatic when I hit college and started rooting for the Ateneo Blue Eagles. In fact, I joined the cheering squad not because I wanted to parade around in a teeny skirt, but because I wanted to be assured of a free ticket to every single game!
I'm not up to date when it comes to PBA, but it gets exciting when the semi-finals roll around. It would have been nice if Ginebra had made it, but they didn't. We weren't loyal to any particular team playing that day, so to make things more exciting, Hamil and I made a bet. During the second game, we each picked a team (I was for Alaska, he picked Talk N' Text). Loser had to buy the other dinner.

I was pretty confident that I would win since Alaska led for the most part, up by as many as double digits at some point. With 44 seconds to go in the last quarter, things got really interesting... 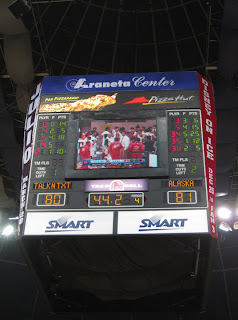 My team was still up, but by a measly one point! So yeah, Alaska led for the most part--except when it mattered! My team-for-the-night lost by one point! I couldn't frickin' believe it. I was actually squealing from my seat in the final few seconds as Alaska made several attempts, to no avail. I was too shocked to take a photo of the final score.
Great game nonetheless. It did cost me this though... 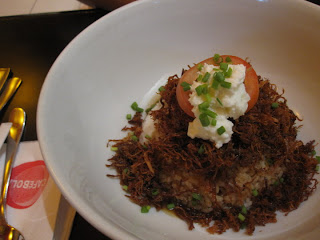 I used to looove Cafe Bola. They had this kickass sour cream-paprika sauce that I ordered over Carambola (mixed balls made of beef, chicken, and seafood) and pasta, but they've sadly phased it out. My second go-to dish: 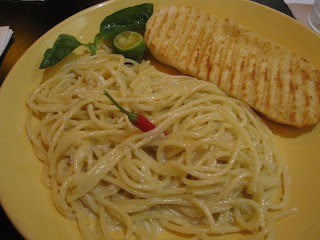 Creamy dulong pasta. Yum. Hamil's order was pretty good too. Will try to replicate it one of these days!

I lost, sure, but it was still a thrilling game. Maybe we could score tickets to the finals...