Last year was a winning year (and not in a Charlie Sheen kind of way). I would go to events and just envision myself going home with something, and quite a few times, I was able to The Secret the stuff. (Yep, I used it as a verb.) This year, not so much. I blame it mostly on my general lack of focus. Sigh.
But today, I got such awesome news--I won the Cocomo Best Getaway Ever promo! If you'll recall, earlier this year, I hosted a giveaway of Cocomo swimsuits. I so wanted to join my own giveaway because I am a fan of the brand. I was thrilled to find out that they had a promo lasting 13 weeks, and each week, they would be giving away a swimsuit, a coverup, and accessories. I waited for a set that truly appealed to me. And last week, I saw this posted on their wall: 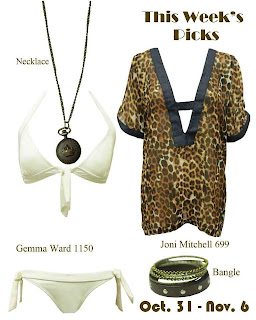 In previous weeks, they gave away a hat instead of a necklace, but I was totally digging the bikini and coverup (rarr!), so I decided that this was the week I was going to join. All I had to do was mail them a photo of my best getaway ever with a short explanation. I was seriously considering sending a photo of me in a Cocomo swimsuit for sipsip purposes, but decided to bring out the big guns and sent this instead... 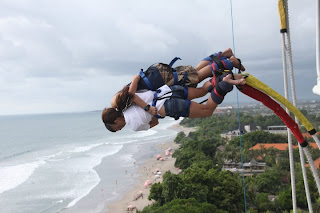 Background story here
And I won! I won!:) Just in time for a planned getaway this month! *happy dance* If you'd like a shot at winning some Cocomo goodies too, do visit their Facebook promo page. Promo runs til the end of the year. Good luck!:)