Today was supposed to be Big Cleanup Day. Since we don't have a maid, we were supposed to spend this day cleaning the house, top to bottom. I decided to start with the dressing room, particularly my vanity. This was halfway through the cleanup, when I had removed a lot of the drawer's contents, thrown a few things out, and was still deciding what to do with the rest... 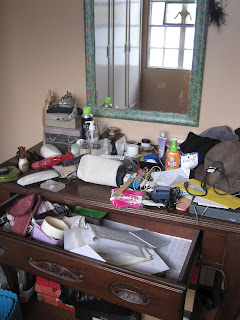 Good grief. I had to keep telling myself that it was going to get worse before it got better.
I just have so much stuff, and even though I've trained myself not to be a pack rat, there are still remnants from my pack-rat past. I found love letters I wrote more than 10 years ago, an invitation to a party in college, negatives, old P10 and P5 bills, three boxes of bandaids (whut?), high school grad pics, and many other random things. I threw out a lot of old makeup, trying not to think it was sayang because, really, who would want to use orange-colored lipstick that's been in my drawer for three years? I'm not even sure it was orange when I first dumped it in there.
The most difficult part about cleaning up is finding paper, because rather than making an immediate decision to keep, toss, or give it away, I actually have to read the damn thing before deciding. But despite all the dust and sweat and the sometimes weird trip down memory lane, I got through it. Two hours and two bags of trash later... 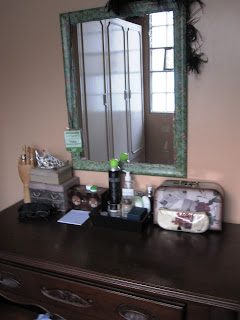 Ahhh
What a relief! It's still not as pretty as I would want it to be--I intend to streamline the jewelry I have on my dresser so that I could just keep one jewlery box, then put all those ostrich and peacock feathers in a slim vase. (Those I cannot let go of--they were part of my bridal bouquet, and I painstakingly dismantled it so that I could keep the feathers.) But for now, it's functional, pretty uncluttered and, above all, clean!!!

Of course, I had neither the time nor the energy to clean up everything else, but it's a great start. I've decided to break down the house projects over the next few days so I won't end up feeling overwhelmed. Tomorrow is general sweeping-vacuuming-mopping day. And I'm hoping that a chair that I had reupholstered and repainted will be delivered. Check back soon for a before and after (and some other home projects I've got lined up)!

Email ThisBlogThis!Share to TwitterShare to FacebookShare to Pinterest
Labels: before and after, cleaning, home