So I pretty much had a free Monday evening. Found out that the Deathly Hallows premiere was happening at Lincoln Center, so I thought, what the heck, might as well check it out. I checked the fansites and found out it was at 6:00 pm, but Muggles were advised to be there "by 10 or 11 am." I LOVE Harry Potter, and was obsessed with it years ago, but I just wasn't willing to stand for eight hours in the cold. So after doing a bit of shopping in SoHo, I headed to Lincoln Center at around five.
Crowds lined the street already, with some people camping out since the night before. Taller people (i.e., most everyone else over the age of 12) were all blocking my view. People cheered as TV cameras panned. Fans came dressed in their Gryffindor best. Those who could see squealed each time a limo pulled up. Teens chanted, "Rupert! Rupert! Rupert!" as Ron Weasley arrived. My brother caught a glimpse of him; I, sadly, did not. Ralph Fiennes arrived, Emma Watson arrived; there was a frenzy of camera flashes, but I still couldn't see anything. By this time, about two hours had gone by since I got there. It seemed like a hopeless cause, so my brother asked if I wanted to go and grab dinner.
"Five minutes," I said. He consented, telling me to get my camera at the ready. Soon, a black a vehicle pulled up at the corner, and people again started screaming. Fans in our area had their cameras aimed right at the space in front of them, and I figured this was my chance.
"Kaya mo akong buhatin? (Can you carry me?)" I asked my brother. He picked me up for a few wobbly seconds. But that's all it took for me to see... 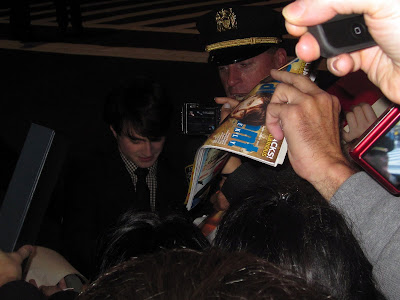 Daniel Radcliffe, the star of the show! The boy who grew up before our eyes! Woo-frickin-hoo!!! My first celeb sighting in New York. Yipee!