A friend of mine asked me to help her with decorations for her sister's football-themed baby shower. We had less than a week to prepare, and I was crazy busy (December ish deadline, planning seminar, video shoot for some conference thing, events--including the Muji opening, woohoo!), so we weren't able to do a lot. But a few snapshots...
My friend's brother-in-law provided us with an "usher": Hottie Ronaldo pointed the way to the venue! (Hmm, I think he'd work in a bridal shower too! Haha.) 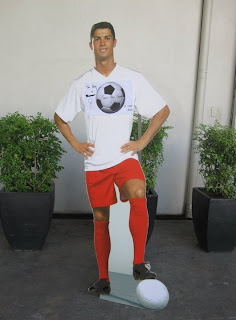 The shower was held at the White Space Commissary, which serves yummy Cafe Bola food. The interiors had a high ceiling and lovely lighting (mostly natural light streaming in through the windows and doors), which gave the place a nice, airy feel. 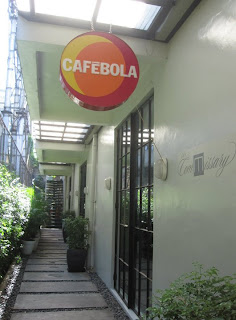 I handcrafted a baby name banner. Originally, I thought of using several different World Cup jerseys as inspiration, but eventually decided use my go-to color scheme for boys' baby showers: blue and orange. Thus, I just made mini versions of the Oranje and Argentina jerseys! 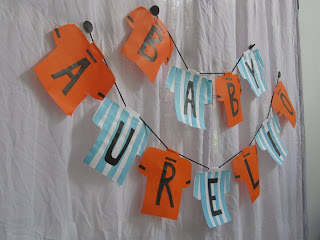 We had baby blue and orange balloons to match. For the tables, I made mini vuvuzelas. In hindsight, I probably should have used another color, because they kind of looked like extra-slim traffic cones! My friend's niece immediately recognized what they were supposed to be though, and tried the whole time to produce some sort of sound from them. I tied blue and white ribbons around them, and placed these on top of grass tiles that my friend brought. Cafe Bola printed out football placemats for us. 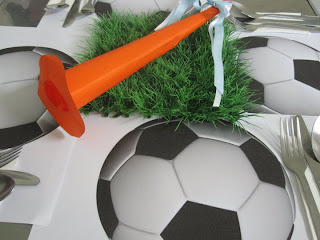 There were football-themed prizes for the games (one was a football relay), courtesy of my friend's BIL. 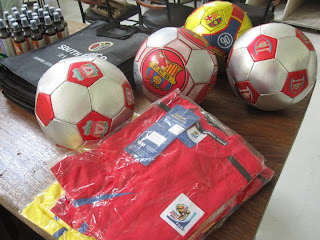 The giveaways were a cupcakes with green frosting to mimic grass, and a little football on top. 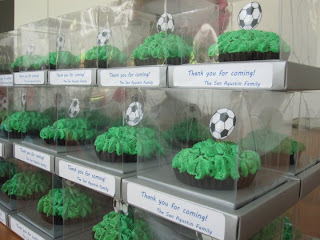 And keeping watch over the cupcakes, Footballer Elmo! I swiped him from my nephew's room. Here he is with a vuvuzela... 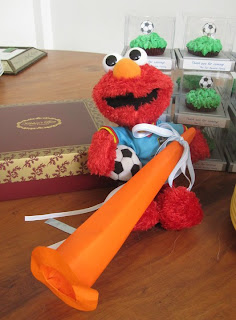 Fun! I'm planning another baby shower before I (again) leave for NY. I'm really starting to consider this as a potential sideline!