How about that? I got another big prize at an event! Last time, it was a vacuum cleaner at the Electrolux event. Yesterday, I went to a Samsung home appliances event and got... 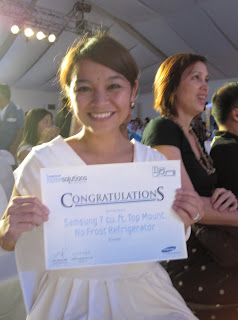 In case you can't read it, it says, "Samsung 7 cu. ft. Top Mount No Frost Refrigerator"! I won a ref! I won a ref!
It was the highlight of an otherwise dreadful day. It was so epically dreadful that our managing editor Kat remarked, "You're so calm. If that were me, I would've called in the army by now!" When things go terribly wrong, there comes a point when you're just done fretting about everything, and just have to soldier on. So that's where I am now--rockin' n' rollin'! Besides, I'd rather focus on the other good stuff that happened yesterday. Like...

...Seeing old friends at the SGV homecoming (more on that in a later post).
...Getting free Wendy's iced tea from Kat, who felt so bad for me that she surprised me with my drink of choice.
...Knowing that some pretty awesome people got my back.
...Having a husband who is there to defend me and support me and fight for me when I'm just too damn tired to fight. "You're my knight in shining armor," I told him. And he replied, "And you're my princess." Kinda cheesy, I know. But when you've got that to hang on to, no bad day can bring you down!