That's the title of a song sung by this guy, at a concert that my husband and I went to last night... 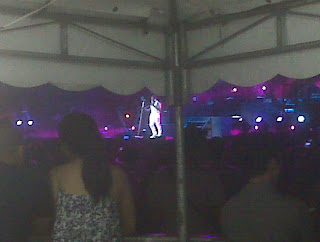 That luminous guy in white, as viewed from our "VIP tent" as Hamil jokingly called it, is none other than Usher! As in "You Make Me Wanna," "Burn," "Confessions," "My Boo," "Trading Places" Usher! In college I danced to a medley of his songs! And at the concert, I realized that my calling in life is to be his back-up dancer! Haha.
In our nearly ten years as a couple, Hamil and I had never gone to a concert together. The last concert I attended was probably...Bon Jovi's, something I'm less embarrassed to admit now, given that they were the top-selling act in the US last year or something. Circumstances always kept us from watching the acts that kept coming over (sigh, even JT and Timbaland). This time, we didn't think we could watch because I had to work the night of the concert. And Hamil told his friends that it would be pointless for him to go since he wouldn't have anyone to dance with. (Sweet.) But things at work went swimmingly, and before 8:00 PM, it became possible for us to make it to the concert! I also figured that I needed to reward myself after a particularly grueling week.

Originally, we were willing to settle for the cheapest tickets (Bronze), but Hamil was able to pull some strings and we ended up with... 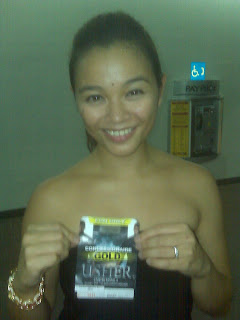 Since we were completely unprepared for this, I didn't have my camera with me. Hence, phone pics!
Woohoo! It was much more than I expected! And given that we (er, he) didn't have to pay full price (far from it, in fact), we were incredibly lucky!
We missed the first couple of songs, but it was still pretty awesome because...

...Usher sounds exactly the same live as he does on the radio--and no, it didn't seem like there was any lip-synching or auto-tuning involved!
...I loved seeing their dance moves. It just made me miss dancing so much. It's been over a year since I was last on stage!
...we had a pretty good view for something totally unplanned.
...he sang some of his old hits, and not just stuff from his latest record. (Yes, "record." It's a clear indication of how long it has actually been since I went to a live concert.)

On the down side, he didn't perform one of our all-time faves ("Twork It Out") and people weren't dancing (what's up with that?). But, ah, mere trifles! We got to see Usher! Yay! What a rockin' end to a long, stressful week!