...and I use the term "restos" loosely here. A couple of them are actually warungs, or food stalls. We ate at a lot of places during our nearly week-long stay in Bali, and some places were more memorable (or mentionable) than others. Our favorites:
5. Made's Warung II
Jl Raya Seminyak, www.madeswarung.com

For our first meal, we walked from Bonsai Villas to Made's Warung II, the Seminyak branch of popular Kuta eatery, Made's Warung. According to our (more often than not) trusty Lonely Planet guide, Made's was the original warung in Kuta, and it supposedly has a much-imitated Westernised Indonesian menu. Its Seminyak sister is in a courtyard, with a few shops by the seating area. I gotta admit, I expected a warung to look more...rustic. The place looked a lot like our local grills (think Grilla or Congo Grille without any of the monkey-themed decor), and had really speedy service.

I didn't want anything too heavy so I just had the chicken sate... 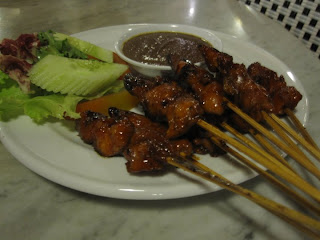 ...while hungry Hamil had the ribs in young papaya. 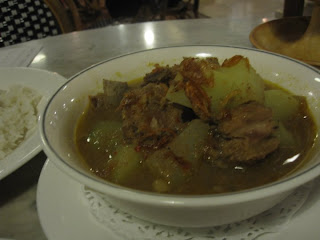 I kind of expected it to be cheaper, but maybe that's because I'm a bit of a cheapskate. Har. Still, I had no complaints. At least the servings weren't teeny. A pretty satisfying first meal.
4. Warung Ibu Oka
Jl Suweta, Ubud

I first read about Bali's babi guling (roast suckling pig) here. Ever since, I told myself that I would have me some of that if I ever found myself in Bali. I had the privilege of having lunch with Anonymous Paul, and his face pretty much lit up as he raved about this popular Bali dish.
Our guidebook recommended Warung Ibu Oka, which was right outside the Ubud Palace. On our second day in Ubud, we headed there for an early lunch, to avoid the crowds that both Anon Paul and our guidebook mentioned. 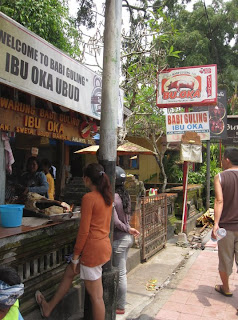 Now, I'm not a lechon person. Filipinos mark fiestas and special occasions with a nice roast pig, and get all excited when they see the pile of meat and skin on a buffet table. But to be honest, I normally skip it and opt for other heart attack-inducing Pinoy treats. Not a big fan. During our trip, I just wanted to try something distinctly Balinese, and I wanted to be able to compare it with our local lechon. 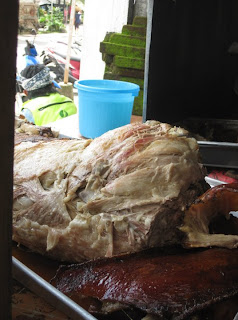 Well, it kind of looked the same as our own lechon. 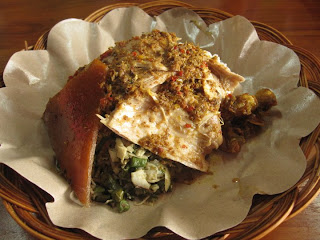 But it wasn't. The babi guling meat was tender, the skin crispy with an ever-so-thin layer of fat. And the whole thing was flavored with herbs and spices, and served with rice and veggies. At the risk of sounding unpatriotic, I gotta say that I enjoyed this much more than any local lechon I've ever had. Although a side of Mang Tomas would have made it even better!
3. Rumours
Jl Oberoi 100

It was our fourth day in Bali, and after having nasi goreng for the nth time, I really wanted some Western food. I had a hankering for some really meaty spaghetti bolognese, and I got exactly what I wanted at Rumours on Eat Street, about a 15-minute walk from our beloved Uma Sapna. 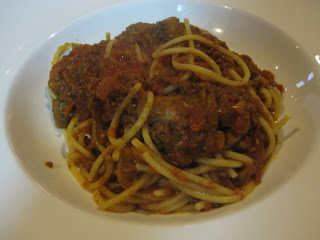 That really hit the spot! I also loved their vanilla-flavored iced tea. (On the very sweet side, but I didn't get follicular pharyngitis for no reason...) I've read that the place is popular because of its steaks, but on this visit, Hamil had some hearty beef dish with a side of mashed potatoes and veggies. 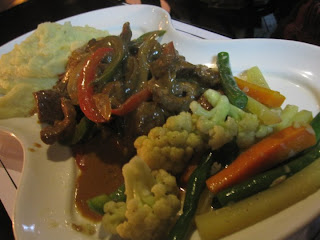 My husband remarked that it was exactly the kind of restaurant he would want to have in Manila--it was laidback, had good music and beer, and served yummy and very reasonably priced food. (We looked at quite a few menus on that street, and this one seemed to be the cheapest.) We loved it so much that we went back the next day!
2. Ku De Ta
Jl Laksmana, www.kudeta.net

Every frickin' Bali guide mentions this beachfront bar/lounge/restaurant, and many of them also warn about the price. (The Frommer's guide lists it under "very expensive.") It's very chic, with a low, open structure surrounding a courtyard, sexy lighting, and loungers outside with a view of the beach (it's lit from the shore so you can still see the waves in the evening). 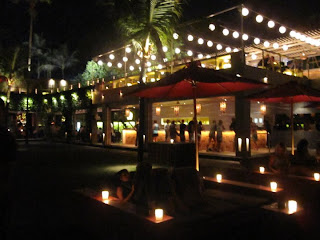 For starters, we had some braised wagyu burgundy pie, lit by sexy lighting. 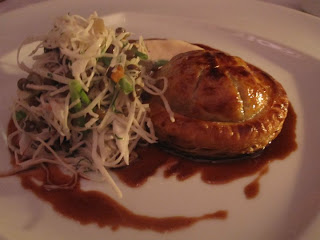 Then I had mushroom risotto. Yummers, but I wouldn't call it the best risotto ever. 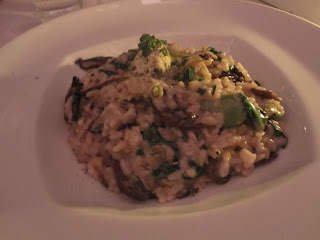 Hamil had lamb, which I didn't eat much of since I don't really like lamb. (All worked out in Hamil's favor.) 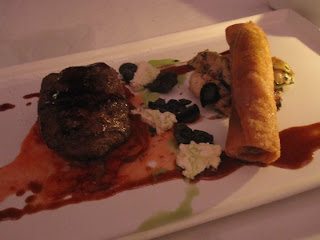 At the end of it, we just closed our eyes as we handed over our credit card savored the experience--because, while they do serve great quality food, what you're really paying for here is the privilege of hanging at one of Bali's iconic spots.
1. Warung Yogya
Jl Padma Utara, Legian

You read right--Ku De Ta isn't number one on my list. That distinction doesn't go to the most expensive meal that we had in Bali, but to the cheapest! (I did mention earlier that I'm a cheapskate!) After Hamil went surfing, we walked around Legian/Kuta, consulting various maps, looking for Warung Yogya (pronounced "Jogja"). I gave my Bahasa a test run by saying "Saya cari Warung Yogya," ("I'm looking for Warung Yogya") and was so successful at it that the locals proceeded to give me directions in Bahasa. Ah. We just followed their hand movements and eventually found the place.

Warung Yogya is exactly like the warungs I had in my head--carinderia-like, with inexpensive food. Seeing the prices on the menu, I kind of expected sad plates of day-old food to be served. I was pleasantly surprised to get the plates of awesomeness that were set before us. We went all local and ordered the nasi campur (a rice dish with peanuts and curried veggies and/or meat)... 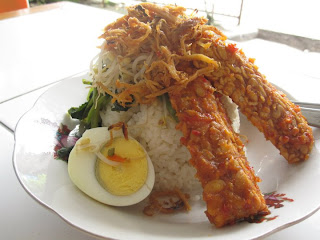 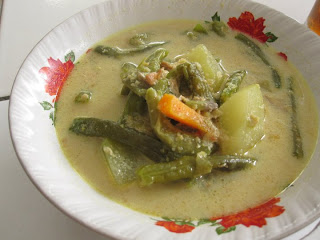 ...and, of course, nasi goreng (fried rice with meat). 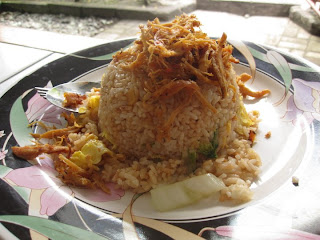 This abso-effin'-lutely delicious meal for two plus our drinks set us back about P200 (less than $5)! Aaaah! I would've eaten there again and again if only it were more accessible from our villas.

So there you have it, our top five picks for the best eats in Bali, and the last of my Bali posts!