Because I was tired of subsisting on ham and queso de bola (gifts from TV5, where I recently did a guesting--thanks, TV5!), and all the sweet Christmas stuff from friends that are crammed into the fridge (and some of it, in my thighs), I decided to cook a proper dinner. I just thought of something super simple and easy to prepare, which didn't require frying since our stove is on the fritz. (I ended up using it anyway, to heat up some veggies and mashed potatoes.) In the end, I decided to tweak something I made a few months back.
Stuffed Chicken Breast with Cream Sauce 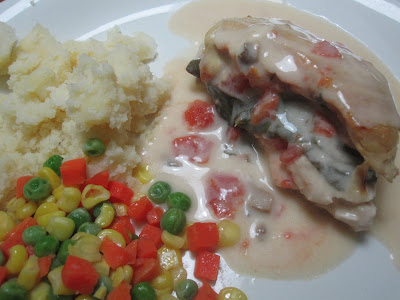 Ingredients
(Note: These measurements are by no means accurate. I normally just throw things into a pot or pan.)
3 boneless chicken breasts
Spinach
Crushed tomatoes (I used the canned version to save me time)
Sauce
Half a can of cream of mushroom soup
3/4 container sour cream
White wine (as much as you like!;) )
Salt and pepper to taste

1. Preheat oven at 400F. (Er, my oven might be inaccurate too.)
2. If you've got time, pound the chicken breasts so that they're nice and flat. If not, just butterfly cut each breast (slice through the center, taking care not to slice all the way through).
3. Place spinach and tomatoes on one half of the chicken. If you wanna add cheese, that'd probably be awesome. Place other half over to cover.
4. Place chicken breasts in a baking dish. Set aside.
5. In a bowl, mix all the sauce ingredients. Pour over chicken.
6. Bake, covered, for 20 minutes. Remove cover, then bake until done.
7. Serve with veggies and your choice of carbs (taters, rice, pasta).

My husband loved the sauce. I think he's generally partial to anything with white wine!

For dessert, I had me some almond and chips ice cream with... 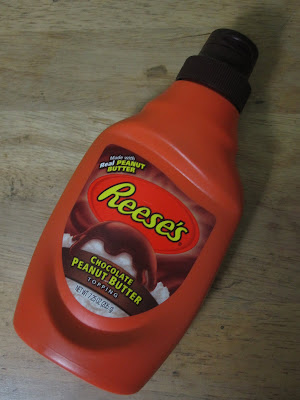 Droooool. My friend Melody found this at the Hershey store when we were in New York, and I couldn't resist buying a couple of bottles (one for me, one for my Reese's Peanut Butter-lovin' cousin). It tastes exactly like melted Reese's! I like having it with vanilla ice cream so that nothing competes with the flavor. That almond thing was just OK, but man, I think my ice cream to chocolate peanut butter topping ratio was 1:1!